The History of 50 Years of the Vernon Lapidary & Mineral Club

Afternoon of February 20th 1959 was clear and cold in Vernon, B.C. with a fresh skiff of snow swirling over the sidewalks and roadways. Soon to be elected Bob King and Harold Cochburn President and Vice-president of the Vernon Lapidary and Mineral club explained the ideas and concepts to 16 eager people.

Etta Thorburn (Sec.), Luicelle Loque(Tres.) and Margaret Munk (Historian) joined the first executive of the club. Larry Lougheed and George Menzies from Kelowna’s 1120 club (started 3 years earlier) were in attendance to help organise where they could.

Three weeks later a trip was taken to Kelowna to learn about some equipment and look at the collection belonging to Geo. Menzies. Following that there were expeditions to Penticton and Kamloops clubs for more expertise.

The first field trip was to be to Monte Lake and down the Douglas Lake road. These sites proved to be very popular through the years – still yielding good finds of agate nodules, calcite, green moss agate (Douglas Lk.) a blue common opal and some jaspers.

In November of 1959 in Kelowna the zone society meetings were formed with the “purpose of promoting a closer relationship between the parent body and other distant clubs by forming regional groups ie. Vancouver, lower mainland and southern interior.” The Vernon club was well represented.

Most of meetings in the early years were held in the homes of the members and the executive.

A ‘rock hunt’ was held in Shaw Springs in May 21-23/1960. Over 300 people from across the province attended including a group from the Vernon club. Pearsons from Tappen found a rare blue agate geode (11inches by 6 inches) which was estimated at $100 per pound.

In early May 1961 a 1660 pound agate was found in the area around Winfield by Lew Carswell, Andy Maksymchuck, Dave Nickefort and Doug Holmes of Vernon. They manhandled it on to a truck and weighed it at the truck scales.

On the 24 weekend in May, 1961 Vernon hosted its first rendezvous. 225 people attended some from Calgary and Oregon. Field trips went to Monte Lake, Douglas Lake, Whitemans Creek, Robbins Creek and Pinaus Lake. It was here a 60 pound piece of jasper was taken along with many 20 – 30 pound chunks.

Stories started popping up about members getting lost on outings serious enough to have to warn all members at several meetings.

A May 1962 trip to the Enderby cliffs yielded lots of agate and crystals lying around to be picked up. They also found common opal and calcite. During this year Vernon send display cases and specimens to Kamloops and Kelowna shows.

By December 15th 1962 there were 55 rockhounders in Vernon attending the Christmas party at the Fish and Game Club. A phonograph, amplifier and records were brough for the dance and $4.75 was made raffling off a bottle of cheer. Also a cover charge of $.25 was used to cover the hall rental of $15.00

Charging into 1963 February 4-6 we held our first gem show and sale in the Legion Hall for Winter Carnival. Tours of students (500) were shown through by their teachers. The club made a huge profit of $396.00

Beginning in 1966 our meetings were held in the library of Beairsto School with the annual dues of $4.50 for a family and $3.00 for a single.

July 18 and 19 1981 Vernon Club hosted the 4th annual Gem and Mineral Federation of Canada show. It was held at the Rec. Center gym and had over 40 cases, 53 non-competative cases and 13 competative cases covering lapidary handicrafts and collections. There were 13 dealers and as many demonstrators plus lots of other activities. The chairman was Gordon Millar assisted by Ann Millar. It was a great success and the GMFC, the B.C. Gem and Mineral society and our club each pocketed $1200.

1984 May we turned 25 years old celebrating the annual society rendezvous in Paddlewheel Park, Vernon attended by 250 people. Etta Thorburn (the first sec. and only active charter member) was given a life membership pin. A comical fashion show put on after dinner by the ladies of the club proved to be a big treat.

In 1986 the club started mall sales – one day to start going to 2 days in April and November. We advanced to 3 day sales in September 1992 but went back to 2 days last year when the mall started charging.

Every year from spring to fall members have been very active collecting material from the field trips and transforming it into unique jewellery and other items like book ends, pen stands, gem trees, clocks and more. Others have learned silversmithing, opal cutting and triplet making,wire wrapping cabouchon making faceting, gem tree making and tumbling

In 1975 Bert & Etta Thorburn worked very hard to get a grant to buy machinery for a work shop. April 1976 we opened a shop in a little shed at Howard House after Bert wired and set it up. That lasted for 3 years and the shop was moved to Stevie Normies garage. 1980 the shop moved again to the Arts Center which is now the Boys and Girls Club near the rec. Center. Again Bert wired the place. The shop, open 2 nights a week, was well attended, and was supervised by our own Arnold Schoepp. In addition he taught members the skills of his craft. July of 2000 it was moved to the Lions Den Basement. Lack of use and the rent forced a move to store in Clara and Henry Rodrique`s shed. April of 2002 it was moved to the Science Center but the rent became an issue and we moved in December of 2007 to our present place at the Arts Center.

The Vernon Lapidary Club is a vibrant active club. We have 113 rockhounders, including 26 pebble pups. We hold 3 mall sales each year – Apr. Sept. And Nov.and along with the Kelowna 1120 Club host the Gem and Mineral show in July at Winfield Memorial Hall. Dealers and demonstrators will be present

It goes without saying that the club has been and will only be a success and a fun place through the hard work of everyone pitching in to help, each with their talents and time. Thank you one and all in the last 50 years

For recognition of their efforts in the past we would like to honour our life members:

Club Meetings are back on!

The Vernon Lapidary & Mineral Club meets every 2nd Wednesday of the month at the Vernon Community Arts Centre from 7pm – 9pm (Covid-19 gathering restrictions adhered to). 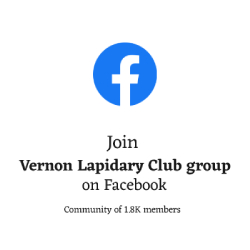